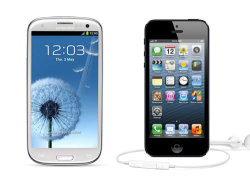 Apple’s jury verdict against Samsung is only the latest episode of the patent slug-fest between the two tech giants. Apple accused Samsung of violating smartphone patents, though to a smaller extent, Apple was found to have infringed Samsung patents too.

While $119.6 million is nothing to sneeze at, it’s a tiny fraction of the $2.2 billion Apple sought. In 2012, a different jury ordered Samsung to pay Apple $930 million, but Samsung has appealed.

It isn’t just companies like Apple and Samsung that engage in these high-stakes IP fights. Even little guys, mom & pop companies and inventors can get embroiled too, as plaintiff or defendant. From initial filing, licensing, litigation and sale, billions of dollars turn on patents, and that means taxes.

If Apple ever collects its millions, it is ordinary income, and if Samsung ever pays, it’s deductible. But smaller companies often worry whether their patent recovery is capital gain taxed a lower rates. For individuals and pass-through entities (S corporations, partnerships and limited liability companies) the difference is big.

One way patent recoveries can be capital gain is via Section 1235 of the tax code. It says a qualifying holder’s transfer of all substantial rights to a patent is long term capital gain. Amazingly, no one-year holding period is required. Payments over time or continent on the patent’s productivity qualify too.

What if you don’t qualify for Section 1235? Capital gain is still possible. Say a non-professional inventor tinkers evenings and invents something. The resulting patent is a capital asset, while professional inventors earn ordinary income. That leads to line-drawing.

Yet outside of Section 1235, the distinction between professionals and amateurs is still relevant. Capital gain should be possible if a patent is a capital asset, it is held for more than one year and the settlement agreement sells the patent. The holding period begins when the patent has been “reduced to practice,” defined as a demonstration that the idea works. Ideally, the settlement agreement will explicitly transfer all rights to the patent.

One piece of advice? If you’re hoping to qualify for capital gain treatment, get some advice before you sign. Another? Don’t get into a fight with Apple or Samsung.