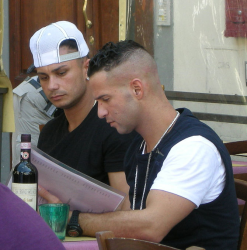 'The Situation' is being accused of avoiding paying taxes on $8.9 millions. His attorney, Richard Sapinski, of Newark, New Jersey, pleaded not guilty to one count of conspiracy to defraud the United States; two counts of filing false tax returns for 2010 through 2012;

Mike “The Situation” Sorrentino knows how quickly life can change.

On December 3, 2009, more than a million viewers tuned into MTVto watch Sorrentino and seven other cast members spend a summer at the Jersey Shore in Seaside Heights, New Jersey. A half year later,nearly five million viewers watched the premiere of the second season of Jersey Shore. By the end of 2010, the cast had crashed the MTV Video Music Awards and found themselves on Barbara Walters’ 10 Most Fascinating People list.

In less than a year, Snooki, JWoww and the rest of the cast had become bona fide reality television stars but perhaps none of them moreso than Sorrentino. Bent on stretching his 15 minutes into… well, something else, Sorrentino amped up his persona and filled his bank account by making paid appearances at nightclubs and bars, endorsing products ranging from vodka to vitamin supplements (because, of course, those two go together) and guesting on other reality television shows like Dancing With The Stars (in the same season as Bristol Palin, David Hasselhoff and Kurt Warner). Sorrentino managed to parlay what felt like a caricature as “The Situation” into money, allegedly raking in nearly $9 million in income for his efforts over three years. It seemed like the whole world was watching him, including, as it turns out, the Internal Revenue Service.

Today, Sorrentino made a different kind of appearance: he answered charges that he avoided paying taxes on $8.9 million. His attorney, Richard Sapinski, of Newark, New Jersey, pleaded not guilty to one count of conspiracy to defraud the United States; two counts of filing false tax returns for 2010 through 2012; and one count for allegedly failing to file a tax return for 2011. Mike’s brother, Marc, was charged with one count of conspiracy and three counts of filing false tax returns; he is represented by Chris Adams of Colts Neck, New Jersey.

Failure to file a tax return is exactly what it sounds like. The conspiracy charges are a little more complicated. According to the indictment, the feds allege that Mike and his brother, Marc (who is also Mike’s manager) used two companies they controlled, MPS Entertainment, LLC and Situation Nation, Inc., to evade taxation. Both of the companies were set up as S corporations which means that they were passthrough entities: the income and expenses were meant to pass through to the shareholders who were, you guessed it, Mike and Marc. As part of the conspiracy, it’s alleged that the brothers took money out of the companies for personal expenses like “high-end vehicles, purchases of high-end clothing, and personal grooming expenses” but claimed that they were legitimate business expenses. They allegedly also deliberately understated the amount of income received by the companies to their accountants who then passed through the lower income amounts to be reported on individual returns. For at least one of those years (2011), the feds say that the income was passed through… and passed over. Mike allegedly failed to file a personal tax return in 2011, despite earning nearly $2 million that year. In total, the pair are accused of failing to pay tax on nearly $9 million.

U.S. Attorney Paul J. Fishman said, about the charges, “According to the indictment, Michael and Marc Sorrentino filed false tax returns that incorrectly reported millions made from promotions and appearances. The brothers allegedly also claimed costly clothes and cars as business expenses and funneled company money into personal accounts. The law is absolutely clear: telling the truth to the IRS is not optional.”