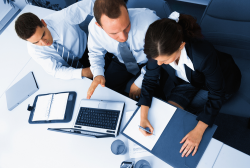 What Americas 15 Most Profitable Companies Pay In Taxes

Earlier this month, executives of Caterpillar CAT +1.84% got bulldozed by Sen. Carl Levin at a Senate hearing. An investigation commissioned by Levin detailed how Caterpillar had ingeniously avoided paying $2.4 billion in taxes since 1999 by negotiating with Switzerland to create a tax shelter for its international parts business.

By moving its parts business away from the U.S., Caterpillar managed to shift 85% of its international parts revenue to Geneva,  thus avoiding U.S. taxes on $8 billion in profits.

Levin accused Caterpillar of cheating the U.S. Treasury of tax revenue on parts designed and manufactured in the United States. “The revenue lost to those strategies increases the tax burden on working families, and it reduces our ability to make investments in education, training, research and development.”

During the hearing Sen. Rand Paul called baloneyon Levin’s assertions, and suggested that Caterpillar deserved an award for fulfilling their fiduciary duty to their shareholders to minimize their tax burden. “We’ve got the wrong people on trial here. The tax code needs to be on trial here,” said Paul.

Caterpillar executives, in defending their tax strategy (devised by PricewaterhouseCoopers ) as entirely legal, joined a brave cadre of industrial leaders to stand up not just to Levin but to America’s egregiously high 35% corporate tax rate.

Last May, Apple Computer CEO Tim Cook got his own painful probing by Levin, who criticized Apple’s long established practice of setting up subsidiaries in Ireland as the domicile for intellectual property and control the distribution of iPads and iPhones overseas. As a result, tens of billions of dollars in Apple revenue flows to Ireland, instead of the U.S. As long as Apple keeps that cash (more than $110 billion) overseas, it’s not subject to U.S. tax rates.

“You are able to shift profits to places where you, an American company, don’t pay taxes. That is not right,” said Sen. Levin to Cook. He asked Cook: “You’re not bringing the $100 billion in foreign cash home unless we reduce our tax rates?”

“I have no current plan to do so at the current tax rate,” said Cook.

And neither would anyone with half a brain.

In just the past year American corporations haveadded more than $200 billion to their overseas cash stash, for a total of $2 trillion. Naturally, they can borrow against that cash to make investments in the United States, but they have no intention of bringing it back home.

For a laugh, check out this description by Jane Gravelle, an economic policy specialist at the Congressional Research Service, of a common tax avoidance method utilized by the likes of Google, Apple, Amazon, Facebook and Starbucks:

There’s nothing un-American about corporate chieftains seeking to avoid having to write a check to Uncle Sam. Rather what is un-American is that politicians like Carl Levin are demonizing some of America’s most innovative and successful companies rather than working to fix our screwed up corporate tax code.

Looking at the corporate tax burden levied in the major developed countries (OECD), the U.S. has the highest corporate tax rate. Combining in the average state income tax, the U.S. is at 39.1%, followed by Japan at 37%, France at 34.4% and Belgium at 34%. The lowest rates are in Ireland at 12.5%, and Slovenia at 17%.

Not only do American companies shy away from earning profits here, but the tax code explicitly disincentivizes foreign entrepreneurs from expanding in the U.S.

This isn’t hard. Congress has considered bills to reduce America’s corporate tax rate. Doing so would, in the words of the Congressional Research Service, “diminish the incentive to shift profits.” Furthermore, “to the extent that profit shifting is reduced, federal tax returns would increase which could assist in addressing the country’s debt and deficit problems.”

Lower corporate tax rates will do more than just bring cash back home. Just imagine the wave of investment that would crash into the United States if instead of the being the world’s toughest tax regime we instead came to be seen as the ultimate tax haven.