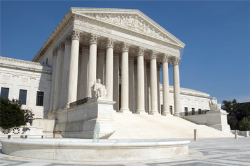 The Supreme Court had a busy day on Tuesday. When the dust settled, however, it had only granted one new case – but it was a big one. The nation’s highest court granted certiorari to Comptroller v. Wynne, setting the stage for a fight that could rewrite tax laws in states across the country.

As noted before, lawyers and judges like to use Latin. Granting certiorari (or “granting cert” for the really cool hipster lawyers) means that the Supreme Court will hear the matter.

The question presented in the Petition for Certiorari in Wynne (downloads as a pdf) is:

Does the United States Constitution prohibit a state from taxing all the income of its residents — wherever earned — by mandating a credit for taxes paid on income earned in other states?

Procedurally, the question found its way to the Supreme Court after the Court of Appeals of Maryland “reached the unprecedented conclusion” that a state is in violation of the Commerce Clause in the U.S. Constitution if it collects income taxes from its residents when the income was earned from sources in another state and is subject to tax by the other state.

In this case, a married couple, the Wynnes, reported taxable net income of approximately $2.7 million. More than half of that amount represented a share of earnings in an S corporation with operations in several states. The Wynnes claimed a credit on their Maryland tax returns for taxes paid to 39 other states but not for any county or local government taxes. The State of Maryland denied the credits and issued a notice of deficiency and the Wynnes appealed. At a hearing, the assessment was affirmed.

Eventually, the Wynnes amended their petition to claim that the tax credit statute was in violation of the Commerce Clause of the United State Constitution. That claim was rejected. At appeal, the Wynnes argued that the state of Maryland was constitutionally required to extend the credit for taxes paid to other states to the county as well as the state, raising the question of whether a state had the unconditional right to tax all income based on residency. The Circuit Court agreed with the Wynnes.

On appeal by the state, the Court of Appeals agreed with the Circuit Court. The Court wrote that, based on its belief that the Constitution prohibits “double taxation” of income earned in interstate commerce, a state may not tax all the income of its residents, wherever earned.

That decision, it was argued by the state, conflicted with a number of “fundamental precepts” involving the “well-established principle” that “a jurisdiction… may tax all the income of its residents, even income earned outside the taxing jurisdiction.” However, in Wynne, the Court of Appeals concluded that the Commerce Clause imposes restrictions on a state’s power to tax its own residents: in other words, Maryland was not allowed to tax all of its residents’ income if the resident paid taxes on that income to another State.

The state argued that this finding was inconsistent with prior law and was, in a word, wrong. The consequences, according to the state’s petition, could be the “significant loss of revenue that will amount to tens of millions of dollars annually.”

And that’s why you should care. Not only does this decision have consequences for Maryland but it “has potential repercussions beyond Maryland,” according to the petitioner (downloads as a pdf). The reply brief for the petitioner specifically notes that “while most states provide full credits for income taxes paid to other states, many local jurisdictions do not.” The result, if the Wynne decision holds, according to the state is that “any jurisdiction taxing its residents’ entire income will face needless uncertainty about the viability of its tax system and its potential exposure to onerous refund claims.”

In other words, an affirmation could cost local and state governments millions of dollars.

The loss shouldn’t matter, according to Dominic Perella, a lawyer with Hogan Lovells who is representing the Wynnes. He said, about the case: “Maryland’s approach is unfair to people who make money in more than one state.”