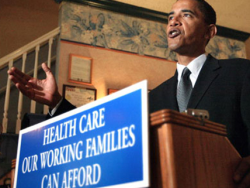 A new study suggests that tax filing season could be the best time to sign up clients for health coverage under the Affordable Care Act rather than the current open enrollment period.

The study, by Katherine Swartz of Harvard University and John Graves of Vanderbilt University, published Wednesday in the journal Health Affairs, offers strong evidence for why the ACA open enrollment period should be changed to align with tax season. Currently, Americans who are eligible for tax credits for assistance with paying health insurance premiums only have from until February 15 to apply. The open enrollment began last October 1 during a botched rollout that quickly revealed technical glitches in the federal government’s HealthCare.gov health insurance exchange, along with many state-run exchanges.

The study evaluates the misalignment of the financial calendar of average low-income Americans with the open enrollment period for ACA health coverage, along with the impact that financial stress has on purchasing decisions. The researchers used data on Google search engine queries to evaluate when people were using search terms such as “health insurance.”

They concluded that holding open enrollment during holiday time could lead to both lower enrollment and poorer decision-making about what plans offer the best value. As an alternative, the authors suggested that aligning the open enrollment period with the tax filing season may resolve these problems.

The next open enrollment period for plans offered in the ACA’s insurance Marketplaces is set to occur between Nov. 15, 2014, and Feb. 15, 2015—just when many lower-income people are financially stressed by demands of the holiday season, the researchers noted.

Recent research by experimental psychologists and behavioral economists strongly suggests that when people’s decision-making capacity is stretched thin, either they cannot make decisions or they make poor choices. Using data from nearly a decade of U.S.-based Internet search queries to measure population behavior, the researchers found considerable seasonality in measures of financial stress and in when people seek out information on health insurance plans. A more opportune time for scheduling open enrollment for the ACA Marketplaces may be between Feb. 15 and April 15—weeks when low-income people typically receive income tax refunds and Earned Income Tax Credit payments, according to the researchers. Such lump-sum payments could be applied to pay individuals’ share of premiums, they argued.