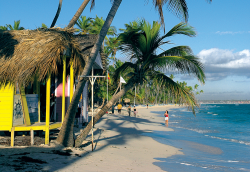 The Real Cost Of Summer Vacation - Dont Get Buried In Taxes

Despite evidence that indicates that vacations lend themselves to happier, healthier employees, we’re still hesitant to leave our desks behind: most of us used only half of our eligible vacation time last year.

Reasons include fear of getting left behind and a little bit of cockiness: we don’t think anyone else can do what we do. An incredible seventeen percent of Americans didn’t use their vacation time because they were afraid of getting fired.

For those of us who do decide to take advantage of vacation time, it’s not always cheap. While there are cost efficient vacations available – you can even staycation at home – it will cost you to pick up and go this summer. According to American Express, the average vacation expense per person in the United States is $1,145, or $4,580 for a family of four.

When you’re calculating the cost of your vacation, don’t be fooled by the proposed cost on hotel rooms and airfare. What is often missing from those figures as you book can be significant: taxes. Travel-related taxes can boost your travel cost by more than 50%. These taxes are tacked on to anything from airline tickets to hotel stays to rental cars.

When it comes to domestic travel, taxes levied on travel-related services increased the total tax bill for a traveler by a whopping 58%. According to the Global Business Travel Association (GBTA), the most expensive U.S. domestic destination by travel taxes, is Chicago, followed by New York City and Minneapolis. Yes, Minneapolis. A recent 3% increase in the Motor Vehicle Rental Tax in Minneapolis helped push it “toward the top of the high-tax group for 2013″ said Joseph Bates, GBTA Foundation Vice President of Research. Bates referred to the trend of increasing taxes on travel in municipalities as “shortsighted.”

Hotel taxes can also push your costs up, sometimes as much as 20%, due to a combination of taxes. In New York City, for example, room rentals are subject to three taxes and one fee: the Hotel Room Occupancy Tax Rate (5.875%); New York State Sales Tax and New York City Sales Tax (combined rate of 8.875%) and the New York State Hotel Unit Fee ($1.50 per unit per day).

Home rentals aren’t exempt from hotel taxes though not everyone collects – for a variety of reasons. Companies like Airbnb, which describes itself as “a trusted community marketplace for people to list, discover, and book unique accommodations around the world,” will soon start collecting and paying taxes in some cities. Many of the rentals which are booked through sites like Airbnb or VRBO are handled through individual owners who are generally responsible for collecting and paying taxes on their own; currently, many such sites are not allowed to collect on behalf of owners in many cities (like New York City).

Don’t forget about airline taxes. Currently, federal taxes and fees in the U.S. make up more than 20% of the cost of a typical $300 ticket. In fact, the cost of fees and taxes has increased each year since 1971 even though the average cost of the base fare has decreased.

Your ticket could include a ticket tax of 7.5% if you’re traveling within the continental United States, Canada or Mexico; a flat Travel Facilities Tax of $8.70 on flight segments to or from Alaska or Hawaii; a flat U.S. Federal Segment Fee of $4.00 within the continental United States; a Passenger Facility Charge of up to $4.50 per facility; and the September 11th Security Fee of up to $5.00 one-way or $10.00 round-trip. If you’re entering or leaving the U.S., you can expect to pay the U.S. International Transportation Tax of $17.50 for all flights arriving in or departing from the United States, Puerto Rico, or the U.S. Virgin Islands; a $5.00 U.S. Animal and Plant Health Inspection Service Fee; and a $7.00 U.S. Immigration and Naturalization Fee for international arrivals. Those are just U.S. based fees: that doesn’t include foreign taxes and fees imposed by other countries. You can see a historic list of air travel-related excise taxes here and a quick snapshot of tax revenues here (both download as a pdf).

It doesn’t stop at transportation and hotels: depending on where you’re headed and what you’re hoping to do on your vacation, you might also get socked with a number of extra taxes. Most cities tax liquor at a higher rate than food although some places, like Miami, impose special taxes on the sale of food and drink by hotels. In Kansas, expect to pay extra if you want a hot air balloon ride and in Texas, you’ll pay a “pole tax” when you visit a strip club. And while you can skirt the sales tax in the state of Montana, you’ll pay a resort tax of 3% in Big Sky “to improve the community” (note that a resort tax is different from a resort fee – the latter is imposed by the specific hotel or resort to cover the cost of pool service and the like). Some cities also tack on fees and taxes to hit the casinos or the fairway, as well as other fun diversions.

Clearly, it can be expensive to travel but don’t let that stop you. I’m not advising against taking a break this summer – in fact, I would encourage you to. I’m just saying be smart and do your homework. If you’re working within the confines of a budget, don’t forget to add in fees and taxes ahead of time… they can really add up. But if you factor those dollars in, you should be fine and you can focus on the good surprises instead of the nasty ones. After all, it’s much better to be buried in sand than taxes this summer.