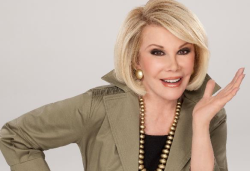 On September 4, 2014, comedy icon Joan Rivers passed away. Today, friends and family will say goodbye to Rivers at a memorial service in Manhattan.

Details about the funeral have not been made public in order to afford the family some privacy. However, it’s no secret that Rivers hoped for a funeral that rivaled her lifestyle: big and over the top. She outlined her wishes in her 2012 book, I Hate Everyone…Starting With Me, writing:

When I die, I want my funeral to be a huge showbiz affair with lights, cameras, action…I want Craft services, I want paparazzi and I want publicists making a scene! I want it to be Hollywood all the way. I don’t want some rabbi rambling on; I want Meryl Streep crying, in five different accents. I don’t want a eulogy; I want Bobby Vinton to pick up my head and sing “Mr. Lonely.” I want to look gorgeous, better dead than I do alive. I want to be buried in a Valentino gown and I want Harry Winston to make me a toe tag. And I want a wind machine so that even in the casket my hair is blowing just like Beyoncé’s.

Those arrangements – Meryl Streep notwithstanding – ought to be fairly easy to arrange with Rivers’ millions. In addition to her book royalties, appearance fees and salary at E!, sales of Rivers’ QVC merchandise have topped $1 billion. It’s clear that her family can afford as ostentatious a service as Rivers would have wanted.

Rivers would have probably gotten a kick out of the fact that the expenses associated with her funeral are tax deductible for federal estate tax purposes – though as a smart business woman, I suspect she already knew that. It’s a somewhat appropriate final deduction for a woman who infamously hated paying taxes and has criticized President Obama for imposing higher taxes on the wealthy. I have to think that finally being able to expense some Harry Winstons has to make her happy.

It likely won’t make her happy that her estate is reduced by federal estate taxes in the first place. It’s difficult to figure the exact amount of Rivers’ fortune – from her $30 million penthouse to her Faberge egg collection – but even with some savvy estate planning, her estate is likely writing a big check to the government. For decedents dying in 2014, the exemption amount is $5,340,000: that means that federal estate tax is imposed on estates with a gross estate plus adjusted taxable gifts over that amount.

The estate is allowed to claim certain deductions against the gross estate. One of the allowable deductions is for funeral expenses and is reportable on Schedule J.

There is no actual dollars cap on the amount that you can claim on a Schedule J. Instead, the deduction is limited to an amount “allowable under local law” and may not, according to the instructions for the 706 (federal estate tax return), exceed the value of property subject to claims in the gross estate plus the amount paid out of property included in the gross estate but not subject to claims. That’s a complicated way of saying, roughly, that you can’t claim more in deductions than you can claim in assets.

Other than that, there is no real guidance in the instructions from IRS (downloads as a pdf) as to deductibility. In fact, the entire instructions specifically targeting funeral expenses take up just one line on the 706:

The statute at section 2053 of the Tax Code is similarly brief.

The IRS does offer some general guidance via memos and their positions in court cases. The cap on deductions is largely interpreted in accordance with state and local laws but is also subject to a reasonableness standard based on facts and circumstances. If Joan Rivers really does have the funeral of her dreams, the associated expenses are likely deductible because they reflect her both lifestyle and her position. We expect bigger than life from Joan Rivers. You don’t have the same expectations from me despite what my mother thinks. There is a distinction and it’s one that the IRS takes into consideration: one size does not fit all.