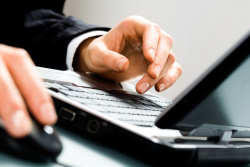 Earlier this week, a panicked reader shot me the link to an article with this headline: 2014 Federal Tax Refunds To Be Delayed Until October 15. I glanced at the article on my phone and fired off a quick inquiry to the media department at Internal Revenue Service (IRS) questioning whether it was true.

A few minutes later, I sent IRS an apologetic “Doh!” Once I had the chance to sit down at my laptop and read through the piece, it was clear that it was a hoax.

I really should have known better. The headline about Gov. Perry suspending football in Texas should have tipped me off. Or the smiling faces of Sarah Palin and Ted Cruz in the masthead. Or the fact that the link was to the National Report, a satirical news website (in the same vein as The Onion).

I giggled and dismissed it, assuming that nothing would come of it. Apparently, however, news – even fake news – travels fast. By this morning, panicked emails and messages about the story were coming at me fast and furious. I posted a quick link on Facebook dismissing the story as a hoax. But that still didn’t stop the concerns – or the reposts and retweets.

It seems that taxpayers are pretty willing to believe that the story is true. Why is that?

Well, for one, it’s IRS. While statistically, the most recent filing season was pretty smooth for most taxpayers, refunds were delayed for a number of filers – and they weren’t happy about it. The prior year, 2013, the IRS announced that the revised form 8863 delayed refunds for some taxpayers claiming education credits – just as the IRS reported being overwhelmed with refund requests. The result? For two years in a row, a number of taxpayer refunds were delayed – although not purposefully.

It wasn’t just tax refunds that were delayed: in 2014, the IRS announced a delay to the start of the tax filing season. That followed on the heels of a delayed start to the 2013 tax season. Sensing a theme here?

The idea that there might be delays in 2015 was then, quite frankly, pretty believable.

The timing of the article also followed some recent news – real news – from IRS about expiring tax laws. The so-called “tax extenders” represent about 50 expired tax laws which expired at the end of 2013. In prior years, Congress has mustered up a vote after the start of the tax year to renew those extenders. But this year, with elections looming, Congress doesn’t show any sign of acting. That has some in IRS worried, including IRS Commissioner John Koskinen. Koskinen indicated that IRS might have to delay the 2015 filing season if Congress doesn’t make up its mind soon. In a letter(downloads as a pdf) to Sen. Ron Wyden (D-OR), Chair of the Senate Committee on Finance, Koskinen warned that the failure to make a final decision about the extenders is causing “a great deal of uncertainty” which “if it persists into December or later, could force the IRS to postpone the opening of the 2015 filing season and delay the processing of tax refunds for millions of taxpayers.”

So the notion that refunds could be delayed wasn’t completely out of left field. Both history and politics make the piece pretty believable.

And of course, I’d be remiss if I didn’t point out that the piece is pretty well done. It’s completely straight-face: there’s not even a little bit of a hint inside the article that it’s fake. Championing it as a directive of the Obama administration to save money on interest and borrowing costs? It sounds like it could happen – historically, both North Carolina and California have held tax refunds over concerns about cash flow.

Claiming that the refund delays are limited to individual tax returns while exempting large corporations? In the midst of the Tim Horton/Burger King inversion brouhahaand public outcry over tax schemes utilized by Apple and Twitter, taxpayers could believe that there are two sets of rules: one for individuals and one for corporations.

Adding in “quotes” (yes, quotes in quotes since they aren’t real) from Senator Rand Paul (R-KY) and Senator John McCain (R-AZ) about “working Americans” just adds to the seeming credibility.

But again, remember: it’s not real. Not even a little bit.

While it might feel believable, neither the White House nor the IRS has made any announcement about a scheduled delay to tax season or held refunds. If – and that’s a big if – it were to happen, you’d see it on Forbes (and not on the National Report). Keep checking back with us: our tax coverage will include everything you really need to know for the 2015 tax season.