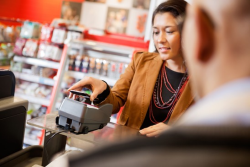 Holiday shoppers who are planning spending sprees at their local stores on Black Friday and Thanksgiving weekend will be contending not only with door-buster bargains, but also with sales taxes, which in some states and localities can be much higher or lower than others.

There is a wide variety of state sales tax rates, ranging from states not having sales taxes at all to those that add more than 7 percent at the checkout register. Wolters Kluwer CCH has created a map of the top 10 highest and lowest state sales tax rates to help holiday shoppers maximize their buying power.

Consumers may be paying more than just their state sales taxes, however, with some communities also tacking on local sales taxes that only apply in certain areas.

Last year, the Senate passed the Marketplace Fairness Act, which would have set a more uniform policy for online sales tax collection in the various states that have signed on to the Streamlined Sales and Use Tax Agreement. However, the House leadership has declined to take up the bill, and a spokesman for House Speaker John Boehner, R-Ohio, recently indicated that he will continue to block the bill until the end of the congressional term in December.